The Most Important 300 Words in the Insurance Industry for 2017

If you had to say one thing to the agency-broker insurance channel, what would you say? And what if you had to shoe-horn it into 300 words?

That’s what I wanted to write. And, in a moment, share it with you. (Then, I’ll ask for your advice.)

It was not my idea. I got cajoled. Arm-twisted. Hog-tied.

And I caved in.

A major international publisher is producing a book about the future of the insurance industry. It’s about ‘insurtech’ – the massive movement to transform insurance with innovations in technology. Or, as some would prefer, to disrupt it.

Here’s a chart of the insurtech landscape prepared by Startupbootcamp, which just released the winners of their competitive funding process. 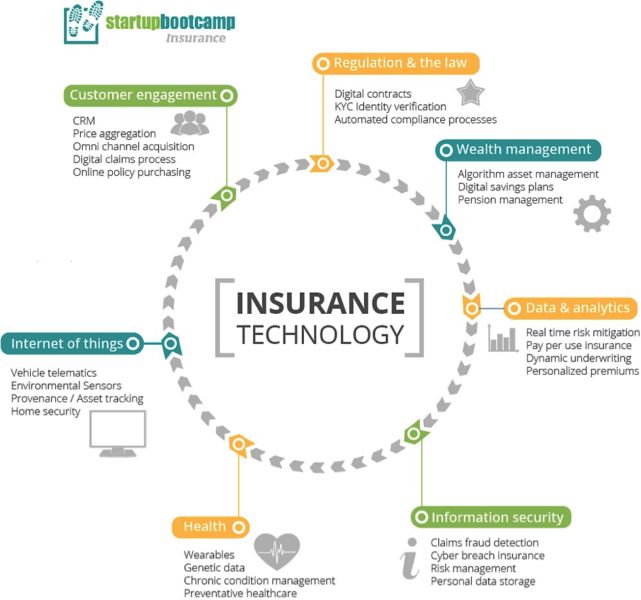 The editors of the publication are seeking contributors. They want a 300-word abstract from prospective writers to help them choose their contributors.

I had no intention to submit an abstract. Plenty on my plate already.

But, a colleague – rather forcefully – said, ‘If not you, who? Who else is going to be the voice of the agent or broker in the modern age?’

So, I wrote my draft. And I’m including it in this blog.

It’s due at the end of the month.

Let’s consider it Draft #1. You can give me feedback. Then I’ll prepare the final draft. I’ll be the writer. You can be my editor.

Here’s why I think it’s important.

I sense we’re past the point where agents & brokers can ignore it. (Man, I hope so!)

But we haven’t reached the point that most agents & brokers are catching up to those consumers. Millennials or boomers.

When the gap between the consumer and the industry grows, that’s a threat.

That gap is observable. Others see it. And many think they can jump into that gap and fill it. With another way of doing business.

That gets to my second point. Big money is chasing you. Billions of dollars and the players behind it think there’s a different way of ‘doing insurance.’ Technology is their tool. That’s insurtech.

Insurtech will change this industry. $3+ billion dollars will do that.

Let’s not fool ourselves. The vast majority of that money is not broker-friendly.

I’ve spoken, written – maybe ranted n’ raved – about change before. And I’ve ranted about this mature industry’s creaky-boned and lackluster approach to adapting to that change.

But this is not a ripple in the water. It’s a tidal wave.

Yes, agents & brokers should be vigilant. Wary even. But some insurtech is on their side.

These were my big challenges.

The obvious problem with a 300-word limit is that you can’t add more. Good ideas get left out.

So, I had to get crystal clear on what I felt must get squeezed in:

So, here’s my shot at it. I’ve got 300 words to say that brokers matter because they do something consumers want. And that the world should be paying attention to them. Building on their strength – and making the entire industry better.

Insurtech for brokers? Not just rebels who want to turn insurance upside-down?

Right. Brokers will fight for their life. And they’ll use the weapons that help them win.

The winners of the insurance battle will win by giving the marketplace what it wants.

Bain’s research shows us just what that market wants.

Some want convenience. No weekends? No evenings? Doesn’t bind online? Not a bit convenient. Again, the direct channel wins this battle. But the digital channel threatens their lead here, too.

But many want peace-of-mind. They care about the central value prop of insurance: protection. The emotional comfort of the local or expert broker delivers best on this promise.

But the economics to support that promise break down. The low commissions on most insurance doesn’t support ‘old school’ relationship anymore.

This allows brokers to deliver ongoing value. To create relationship. To touch the right people with the right message at the right time.

Insurtech is not just about efficiency. It must be about the customer. Winning them. And delighting them.

As Steve Jobs said, “…it’s technology married with liberal arts, married with the humanities, that yields us the result that makes our hearts sing.”

That’s the promise of insurtech for brokers. And the comfort and confidence for the clients they serve.

Who knows? Perhaps agents & brokers aren’t sexy enough to get into a book on industry-transforming technology. (I think you are!)

But let’s give it a shot. Can you take a moment and give me some feedback on my 300 words? Leave a comment. Or, if for some reason your thoughts are more private, send me an email. Thank you.