9 Insurtech Leaders Predict The Future: What Agents & Brokers Must Do Now to Fight Back 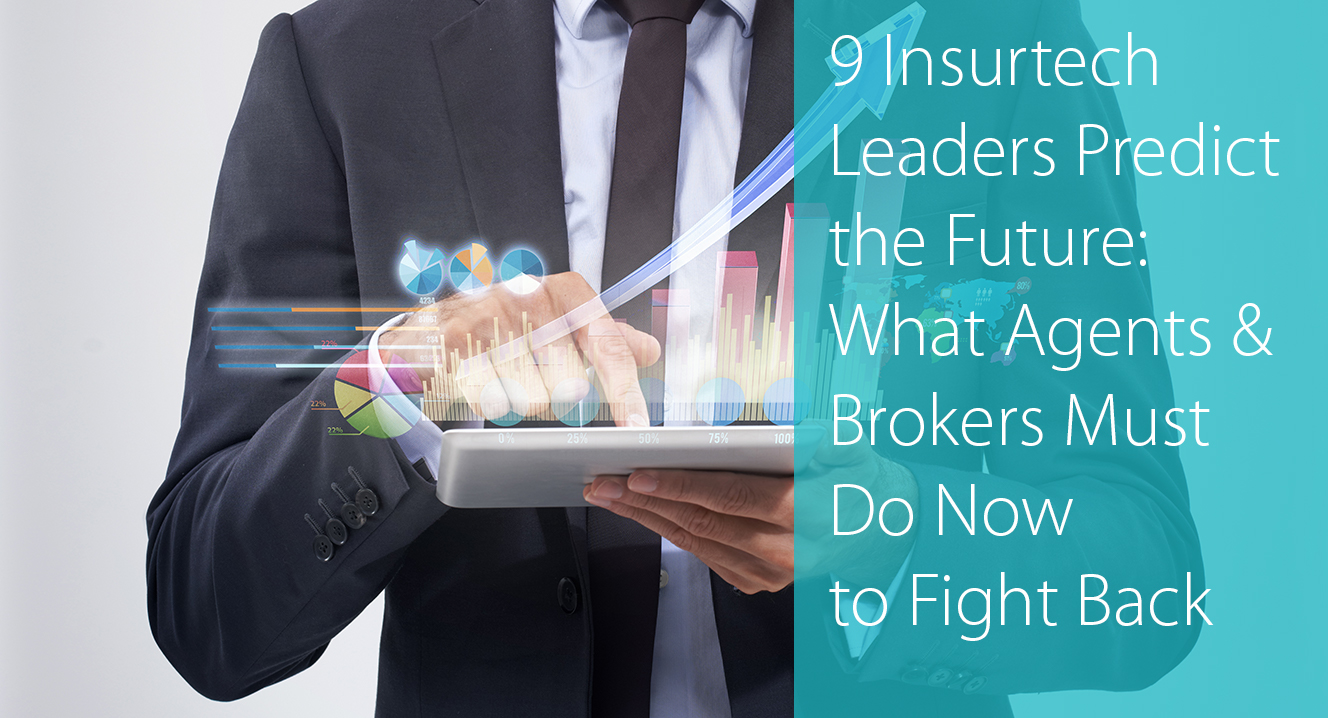 The insurtech controversy. Will it hurt agents? Can they survive?

Or – best case scenario – will the tsunami of new technology help agents thrive like never before?

Clearly, most insurtech is hostile to the agent-broker channel.

But, some see a silver lining. (Myself included.)

Agents and brokers who act quickly and fight back with agent-friendly insurtech will dominate their marketplace. Easier and faster than ever before.

Let’s start by taking a close look at insurtech itself. This growing ‘sub-industry’ attracts money. It attracts talent.
And it has developed a body of business leaders, investors and thought leaders who clearly believe that ‘insurtech is the future of insurance.’

Let’s see what some of those leaders say about insurtech.

I was recently selected to co-author the upcoming Insurtech Book, published by the international publisher, Wiley. That has exposed me to the most current thinking about and execution of insurtech ideas. And to the people who have and act on those ideas.

I’ve identified a handful of insurtech leaders, along with their most poignant comments and declarations about the future. Let’s examine a few of those.

And, let’s see precisely what they might mean to the future of the agent-broker system.

Insurance is ripe for disruption…and insurtech wants the job

“The insurance industry has remained much the same for more than 100 years, but over the past decade it has seen a number of exciting new innovations and new business models…InsurTech, is emerging as a game-changing opportunity…”

“We are seeing that start-ups gradually eat the insurance old guard. With traditional marketing dead or dying, traditional insurance companies must change now or find themselves losing revenues and market share.”

In 2008, Jim Keyes, the CEO of Blockbuster, said, ‘“Neither Redbox nor Netflix are even on the radar screen in terms of competition.” Shortly after, Blockbuster declared bankruptcy. And Netflix transformed the video industry.

Business leaders risk not seeing ‘big wave’ trends. They sneak up on you. After all, they start quietly. Usually, outside of or on the periphery of the industry. (Sometimes in garages.)

We’re beyond that now. Insurtech is full of start-ups. But, as a ‘sub-industry,’ it’s no longer a start-up. It has money. It has products. It has conferences. It has magazines.

But, as business leaders, it’s easy for us to be so focused on what we do or so focused on the obvious competitors, we miss the ones we’re not trained to see.

Then, one day, things don’t look so much the same.

And you’re time to act is gone. Over.

As every good insurance agent knows, the time to prepare for a hurricane is before the hurricane.

The time to prepare for insurtech is today.

“I’m not saying there won’t be a bumpy ride along the way or that many start-ups won’t disappear, but if that scares you, you should not be part of it. Those who stick it out, with some luck, they will be able to change the insurance industry forever and along the way provide customers with personal services that most people don’t even dare think are possible. That’s why I strongly believe that the InsurTech industry will have many great years ahead of it. We are just beginning. That’s all I need to know to give it my all.”

“This future is coming and it’s coming fast!”

Don’t judge insurtech by its failures. Failures are standard operating procedure for start-ups and disrupters.

I’ve heard many an agent and industry pundit point to Google’s rapid entrance and exit in insurance as an example of ‘how it can’t work.’ “Look,” they say, “if Google can’t make, with all their billions…”

Google tests. They do it fast. They do it big. And they measure. Google’s entry into insurance was a blip in their screen. And their exit was simple and strategic. They determined they’d get more revenue from the huge insurance advertising revenue than from selling insurance.

Innovators have captured the imagination of very serious investors. Some will fail.

Others may very well take your customers.

“The potential of the InsurTech and FinTech industries is so huge that whatever impact most of us imagine they will have in our lives will only scrape the surface.”

Newspapers were paper. Music was vinyl or plastic. Pictures were printed. Phones had wires. Books were ‘things.’ Documents were made on typewriters. Travel agents booked your flight. Cameras were…cameras.

Funny…insurance really does look like it did so many years ago.

Just don’t take that for granted.

If you’ve been in the insurance industry as many years as I have, it’s easy to develop a common disease: the one that makes you think ‘this is the way it is.’

Then, someone comes around with a vivid imagination. They think it can be different. And they have an idea on how they can make that happen.

Insurance has had natural barriers to disruption. It’s complicated. It’s highly regulated. And it’s pretty good at what it does.
But those barriers aren’t impenetrable.

Once the dam is breached, there’ll be water everywhere. Look at those other industries. They’ve been ‘Kodak’ed.’

Venture capital is not too keen on making a little change. They want change all right. Big change.

Here’s how it’s going to happen: carriers will partner with insurtechs

“The most progress will likely be made by partnerships between innovative nimble start-ups and incumbents who are skilled at navigating a highly regulated and complicated ecosystem.”

“Insurance players will still be relevant in the future but will have to be insurtechs.”

When was the last time Fortune Magazine featured a major insurance executive as cutting edge innovator? Uhhh…never? But, Wired Magazine was happy to host the CEO of insurtech Lemonade as a speaker at their recent annual conference. Not to talk about insurance, of course.

To talk about disruption.

Established entities are great at doing what they do. Or, in the case of insurance, pretty much doing what they have been doing.
Those well-established systems, with an army of employees and well-documented systems, procedures and workflows would likely keep on keepin’ on.

If they weren’t threatened.

But, when the writing’s on the wall, good executives read it. And do something about it.

That’s why more and more insurance carriers are partnering with insurtechs. Or funding their own venture capital fund. According to CBInsights, “10 of the top 25 largest US P&C insurers have invested in a tech startup since the start of 2015.”

And that’s exactly what smart carriers are doing today. Innovation may not be in their blood.

But they can buy it.

It’s (partly) about connecting with (your) customers

“InsurTech has put the customer at the core of the value chain, solving for legacy industry pain points, which lends itself to lots of opportunity to engage with their customers.”

The customer. At the core, they drive the change.

And, if you haven’t noticed, they’re not big fans of insurance.

It’s no wonder. In its Global Customer Insurance Survey, EY reported that, “44% of current customers report no interactions during the previous 18 months.” And only 14% reported being highly satisfied with the communications from their insurance provider. (And they said this was a relationship business?!)

In a later report, they urged their carrier clients, “be ruthless with brokers who are damaging the long-term economics of your business.”

What does all this mean for agents & brokers?

Like so many industries before it, insurance is ripe for disruption. Or, at least, change big enough that some tables will be turned upside down.

Insurtech wants that job. It may stumble. But, it’s leadership is committed to making it happen. And they want it to happen fast.
To accelerate change, established carriers are partnering up with insurtechs.

And – agents beware – if ever there was a time to protect your customers, that time is now. If you don’t earn their loyalty, competitors will do their best to earn it.

And those competitors may not look anything like ‘the guy down the street.’

Get the job done right. Pick up the tools.

A couple of weeks ago, a panel moderator asked, “Michael, what would you say to an agent who’s not comfortable with technology.”
The question gave me pause. I’m front of several hundred agents. Do I soft-pedal – and give hope to those who struggle with technology?
Or do I tell the truth – and risk offending agents and brokers in the audience?

The answer was clear: tell the truth and offend the audience.

The agent who is uncomfortable with technology is like the contractor who shows up empty handed, saying, “I don’t really like working with tools.”

Agents who are serious about customers – getting them, keeping them and delivering value to them – use tools. Tools get work done. Faster and easier. Tools make things that were impossible, possible.

Agents who are uncomfortable with tools should:

It’s the right strategy for them. The wrong one for you.

Those are not the people best served by our channel. Nor are they the people who most reward the agents and brokers of this channel. Our best match are those who care most about protection and peace of mind. Earn their loyalty – and they will reward you richly.
By referring their friends and colleagues.

By staying with you longer.

And by buying more insurance.

If it’s high margins and fast growth you seek (what else?), be authentic and deliver ongoing value. Deliver on the promise of ‘relationship.’ Those who seek it will reward you for years to come.

Insurtech is real. It’s a little unpredictable. But the money is real. The commitment is real.

And – at least, some of it – wants your customers.

Fight back. With insurtech of your own.

Michael Jans is the co-founder of Agency Revolution, an ‘insurtech‘ software provider committed to the independent agent and broker.

Get your free copy of Michael’s latest book on marketing, strategy and digital marketing, Connect: How Insurance Agents & Brokers Dominate in the Connected Age