How to Get Over Analysis Paralysis 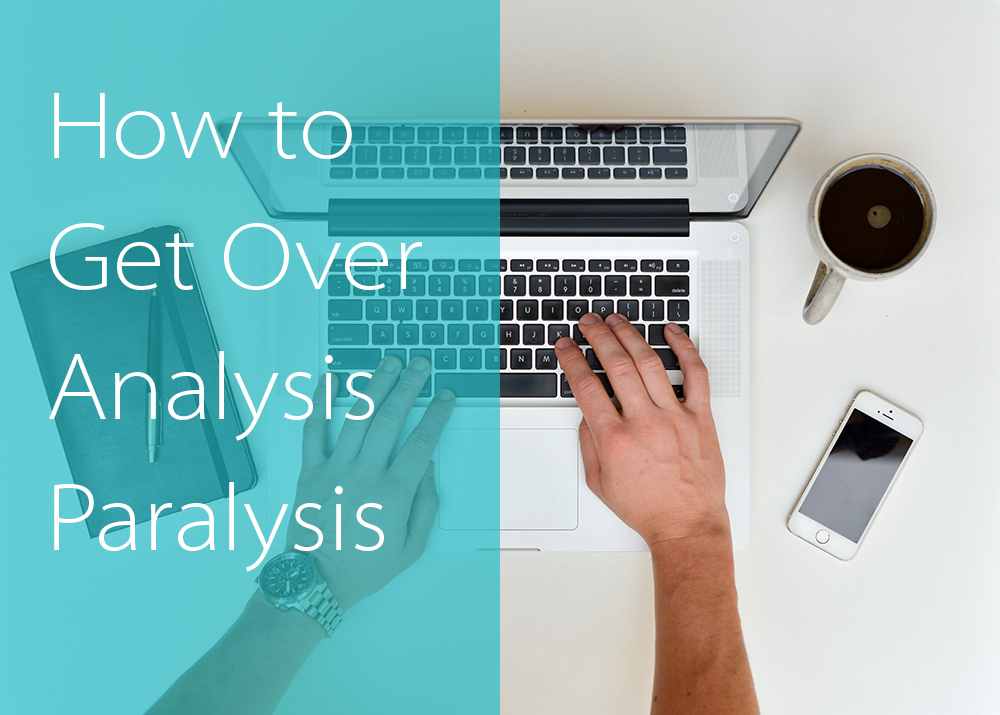 Over the past 10 + years in the insurance industry I have been accused of being good – if not great – at many things. Relationships, Speaking, Selling, Marketing just to name a few. But I think the one I’m most proud of is being really great at poor spelling and grammar. Actually good thing for spell check or I would have spelled grammar incorrectly. But had spell check not been up and running this morning, I would have typed away until I was done, gave it a quick read then click publish anyhow.

WHY you ask? Why would I knowingly post something that has a lot of errors? Well frankly I wouldn’t, but as I mentioned before I’m a poor speller, a product of the digital age, where red squiggly lines tell me when I have made a mistake. I wouldn’t know there where any errors until someone took the time to point them out to me. But it wouldn’t bother me in the least, wouldn’t cause me to regret my decision to send it, post it, mail it or whatever it.

WHY you ask? Thats easy, I don’t sweat the little stuff, I’m not to detail oriented to get out of my own way. I don’t have Analysis Paralysis!  I believe wholeheartedly in the 80% rule. I didn’t know that the 80% rule even existed until I heard someone suggest the idea at one of the first marketing conferences I ever attended.  Insurance Marketing Boot Camp, fall 2006 in Chicago Illinois. I had come to admire the writings and teachings of Michael Jans. While being consumed with marketing ideas that nearly made my head explode he made mention of this 80% rule. It’s better to be fast and first to the market with an idea and have it 80% correct, than to wait until you’re sure that it is all 100% correct then head to the market. Meanwhile 30 other agents or brokers have gotten to the line before you.

With all that said, I didn’t knowingly start making mistakes or haphazardly marketing to the world. I went about my way implementing all kinds of stuff that I thought would work and some did and some didn’t. Thats the game right! It wasn’t until the next year when I was returning to the same conference and I was actually invited to present some of my ideas to the group. Boy was I excited and boy did I think I was king of the world. My head size grew exponentially!!

As I walked into this beautiful conference centre in Chicago and started floating around like everyone should know who I was cause I was in the program, I noticed Michael Jans doing a presentation to a small group of brokers and agents. I’m not sure what he was talking about exactly but I would have to assume it was the 80% rule, but I remember feeling so accomplished when I looked at the screen behind him and he was actually using one of my marketing pieces as an example!! WOW, I must really be that good!!

As I took a moment to check out my handy work I noticed that the headline on the flyer that he was sharing was misspelled. At first I assumed that perhaps he had the wrong file or I uploaded an incorrect file to the sharing library we were all using at the time.

It wasn’t until after 10 minutes of research on my laptop that I realized for the past year I had been sending out that flyer with the misspelled headline to thousands of people in Nova Scotia, repeatedly!! ‘Save Hunreads even Thousands on your Home & Auto Insurance’.  Needless to say I was more than a little embarrassed, but then it hit me, No one ever called and complained or corrected me! And in our small little 2 person start up office we had written thousands of policies as a result of that flyer in the last year!

Of course I fixed the flyer for future distribution but I realized then that either most people were as poor of spellers as I was, or they simply didn’t care and the few that did well the heck with them! I’ll likely never live up to their idea of perfect anyhow!

This was not my last brush with spelling and grammar errors. There were several in between the flyer spelling error and the email read round Nova Scotia, but the email created one of the best opportunities that I didn’t know existed.

Of course we all know it is important to move towards a digital presence and if you haven’t started that move you’re about 10 years behind but it’s better late then never. Digital is a little confusing for me sometimes and I don’t think it is as fun as silly lumpy mailers, crazy radio ads, mispelled flyers or vehicles all decked out with cool slogans. But it is effective and the world is moving that way. So we jumped on that band wagon and started using email marketing. Of course I’m passionate about what I do and wanted to get the wheels rolling as fast as possible!

The logical first place to start is making sure all of our clients know about our referral program! So I created a very nice looking email that had all the usual things in it – good content, some links and salutations from your truly! I even proof read it once and made some much need obvious changes. Unfortunately I forgot to save those changes and immediately selected ‘send all’ and out it went to 12 000+ email addresses we had at that time.

I can still recall the feeling of accomplishment, I was now a digital marketer!! It wasn’t to long after I click send and had my moment of reflection that my phone rang. It was a very nice lady I worked with in one of our other offices, she asked ‘How many people did you send that email to?’ I very proudly proclaimed to her ‘Everyone! Every single client we have an email address for’ to which she replied ‘Didn’t you proof read it?’ I was offended of course I proof read it. The email then landed in my inbox as well and I saw first hand what she was a bit alarmed about. In an email with about 60 words I had misspelled approximately half of them including my own name, and lets just say there was more than a few grammar errors to go along with the spelling fiasco.

Well what do you do now! You just sent an email out to the world that clearly makes you and your business look a little on the unprofessional side. Fortunately I’m a glass half full kind of guy and can find the opportunity in most any situation and generally speaking I’m quick on my feet. So back into the email editor I went, Copied the email with all the errors, but added a few short sentences and changed the subject line. The subject line now read ‘I can’t spell’ and the sentences I added simply outed myself as careless and semi illiterate. I also asked our clients to simply reply with their estimate of how many spelling and grammar mistakes were in the email and from those who responded correctly we would do a draw for a company SWAG bag with all kinds of company branded clothing and merchandise.

The response was unbelievable, hundreds of reply emails with answers, comments and even testimonials. I can remember one email coming from a client that was the director of marketing for a large firm asking, if I actually sent it out in error with all the mistakes or was it possibly a marketing ploy. he advised if it was intentional it was one of the best marketing ideas he had ever seen!

Many more clients responded with comments like ‘hey we all make mistakes’ or ‘I can’t spell either’ and even ‘At least I know your emails are coming from a real person!’ While other staffers within the company didn’t find the humor in it, like I did after a few hours, it hit me! All these people were spending time reading this email over and over in the hopes of winning a t-shirt and a hat, but in  reality they were reading over and over again about our referral program!! The number of clicks within the email went through the roof and no surprise – referrals went up in the next few weeks!

I’m sure some of you will find a few spelling hiccups in this or with out doubt so grammar errors, feel free to reply with your corrections and I’ll be sure to take note!

Joel Zwicker is a Business Development Manager for Agency Revolution. He has worked at Agency Revolution for 2 years and was a client for 9 years as the ‘Marketing Guy’ at A.A. Munro Insurance. Joel connects our clients to Agency Revolution tools and resources that help their agency or brokerage create deep relationships with their customers and marketplace.