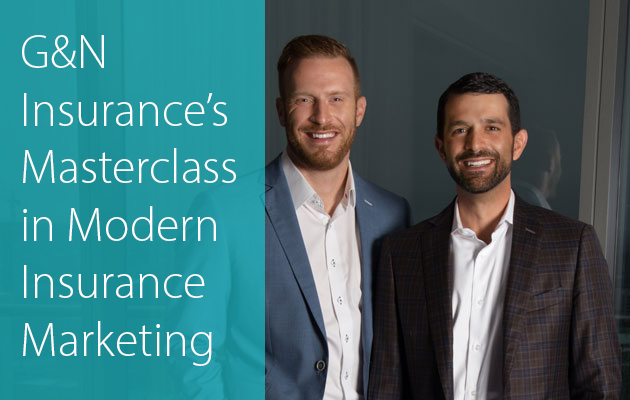 The universe of potential insurance clients is vast – so vast, in the words of G&N Insurance’s Matt Naimoli, that most independent retail insurance agents say, “Oh, my God – the pie is so huge, and I have so much opportunity. I’m just going to go capture it all.”

While a number of agents might be successful with that approach, Naimoli and his business partner Zack Gould used a decidedly different strategy when they launched G&N Insurance in January of 2010.

Nine years and 10,000+ clients later, the results of G&N’s approach are a case study in successful modern insurance marketing. So, what’s their secret? Michael Jans of our own Connected Insurance Podcast sat down to talk with Zack Gould and Matt Naimoli in October 2018, and subsequently summarized the episode as a “Bonus Edition Masterclass”.

Speaking of the Connected Insurance Podcast’s Masterclass in Modern Insurance Marketing, Jans’ interview with the G&N principals concluded a multi-part series with some of our industry’s most notable thought leaders – a series designed to help independent retail insurance agents keep up with the tools and tactics that shape today’s marketing landscape. In case you missed it:

A story of the modern age

The co-founders met in 2006 when they were reaping significant career successes at Liberty Mutual Insurance. Gould, a graduate of the University of Connecticut and a Massachusetts native, had been encouraged to pursue sales by a particularly insightful college advisor. He joined Liberty Mutual after completing his Bachelor’s degree in Risk Management Insurance, and quickly became one of its top national salespeople.

Similarly, Naimoli, the son of two Peace Corps volunteers, played Division 1 baseball for the University of Vermont and parlayed a senior year internship at Liberty Mutual into a full-time job there upon graduation. He, too, became one of its top salespeople. In fact, he and Gould flip-flopped the #1 and #2 sales spots in 2007 and 2008.

There was a rivalry between the two, but a mutual friend told them that they were both great guys who shouldn’t be pitted against each other. He arranged for them to meet over a beer. Gould describes it as one of the luckiest things that’s ever happened to him.

A friendship developed between Gould and Naimoli, and they realized that they had a lot in common. Despite the good things that were happening in their careers, as Gould describes, “The more we’d share, the more we became closer and we started to realize that both of us wanted to do something for ourselves and create something.”

Naimoli adds, “In general, I think we’re both builders and expanders. When you work in a Fortune 100 company, it’s great because you can expand pretty quickly and build and get to hit certain ceilings. But once you reach a certain limit, it is claustrophobic in ways, so (starting our own agency) was a natural next step.”

After about a year and a half of active planning, Gould and Naimoli opened G&N Insurance in January 2010 – right at the end of The Great Recession. What might have been considered horrendous timing, in fact turned out to be very instrumental in helping the agency to find—and remain focused upon—its niche.

In less than nine years, G&N Insurance acquired more than 10,000 customers and has been twice recognized by Inc. Magazine as one of its 5000 Fastest Growing Companies.

Unsurprisingly, given the agency’s year-over-year client acquisition rate, when Naimoli and Gould talk about G&N Insurance’s success, they point to lead generation.

Says Naimoli, “If you’re going to go into business, the lead gen, the relationship management, and the top end of the funnel is so, so vital. You have got to be able to go create leads and convert them into sales or you don’t have a company.”

At the top of G&N’s funnel is the referral partner – something Naimoli refers to as their “secret sauce”. The company went “all in” on networking from its very first days in business, understanding that connecting and building relationships with referral partners was critical to lead generation.

“If you were to ask an insurance agency owner and insurance agent, ‘What’s your niche?’ you’re going to shake your head, because so many people don’t have that exact customer,” asserts Gould.

“From an age perspective to where the potential is moving, to their income level, to how many kids they have, to if they’re married or not, we have that down to the exact person. If more insurance agency owners had their exact client narrowed down, their marketing would become easy.”

As for that niche, at G&N Insurance, it is selling personal lines to one well-defined group: homebuyers in Massachusetts. Even during a bad year, there are 40,000 home sales – and in a good year, that number can swell to 60,000.

“We forget everything else,” says Naimoli. We literally punt every other opportunity and we just say, ‘Hey, let’s just focus in on that pie.’ Getting 5% or 6% of, say, 50,000 is a monster, monster year.”

Homebuyers represent marketing Nirvana for G&N Insurance. Demographically, it’s a group of people who are ideal clients at the best time that they can be acquired. As Naimoli describes, “Their closing ratio is the highest. Their retention rate is the highest. The number of policies sold per client is the highest. The sales time cycles are the shortest, and the loss ratios are really strong.”

“We found a niche of people purchasing real estate and realized that if we created relationships with people who are influencers in the home-buying industry, well, the referrals would flow,” summarizes Gould. “We reverse-engineered how to open up the company because we found a differentiating factor.”

Skip the Starbucks card – get the giver’s mindset

“We just focus on mortgage lenders, realtors, attorneys, financial advisors and people in Massachusetts who influence their buyers and that’s been our networking through literally eight years. That’s all we did when it came to networking,” says Naimoli.

It’s a tall order to maintain, strengthen, deepen, and nurture the relationships with hundreds of referring partners. The principals realized a long time ago that to be effective, they needed to skip the Starbucks cards, and adopt a giver’s mindset.

Naimoli explains that giving a high-end loan officer a referral thank-you gift of a $10 Starbucks card has very limited value, and it ‘dries up’ quickly. “You cannot scale networks like that,” he says.

Instead, as Gould describes, the partners delve into their partners’ business processes and try to help with their networking and operational challenges. They ask thought-provoking questions and they care about the answers to those questions.

“We ask, ‘How can I introduce you? How can I help grow your business?’ We find out if they need help. We actually, with all of our heart in that meeting, want to help – for two reasons: one, increase impact and two, we might be able to obtain value from them. We go in with a giver’s mindset and we ask questions that we care about the answer and it relates to a good conversation.”

Naimoli sums up their approach as follows: “Be interested, be present and ask a ton of really great questions to learn about them and get them talking about themselves and what they care about. Literally, we go through the meeting and we dig deep to find out everything about the person, not just personally, professionally, all their pain points, everything.”

Process is not sexy

In nine years, G&N Insurance has grown to 34 employees. Gould and Naimoli, who originally “did everything” from selling lines to filling the toner to scheduling their own appointments, have managed to step above the day-to-day tasks and create clear, efficient and effective processes that deliver reliable results, which in turn has enabled the agency to grow at an exponential rate.

Naimoli says that a key factor in their ability to scale the business was hiring a coach from outside the industry. “It helped educate us on how to be entrepreneurs and business owners and not just insurance agents,” he explains.

The partners have been deliberate in hiring, bringing in talent for every department. “We just did it, got through it, and then once we got traction, we said, ‘OK, now let’s bring in an expert to make it better.’” says Gould.

This ability to delegate pays dividends. As Naimoli explains, “Chaos happens on a daily basis and I think the reason why we were able to grow was because so much of the other stuff was delegated out and systematized throughout the agency.”

There’s much more to hear in Zack Gould and Matt Naimoli’s entire conversation with Michael Jans, including their tips for effective social media tactics. Tune in to this episode of the Connected Insurance Podcast to hear it all – and for year-round insight and inspiration, subscribe to the podcast to get alerts of new episodes delivered right to your inbox.