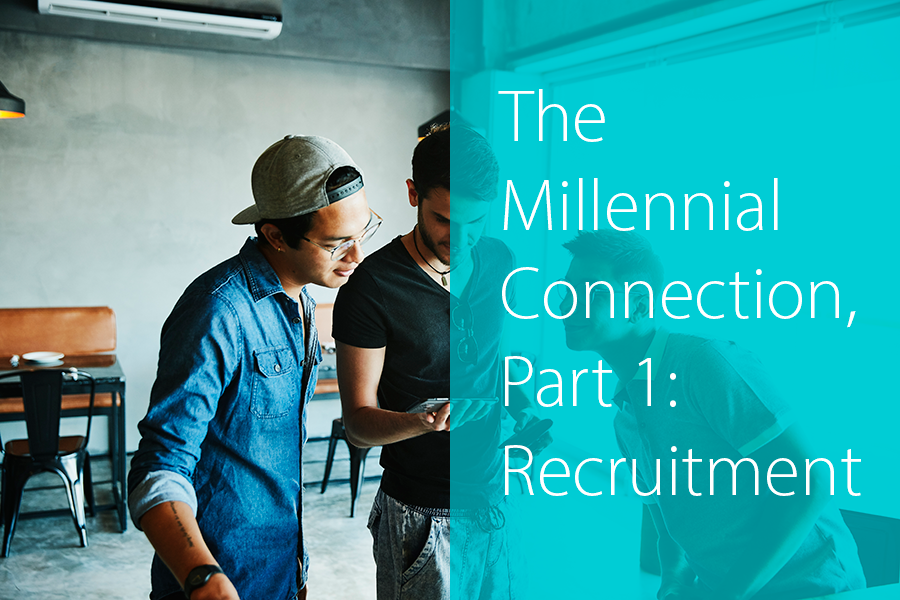 Our recent Live Webinar Roundtable Attracting Millennials in the Modern Insurance Landscape contained a lot of powerful insight about attracting millennials both as customers and as employees – and we don’t want you to miss a single crucial detail. Here, we summarize the panel’s key takeaways for recruiting millennials into the independent insurance workforce.

NOTE: We discuss the panel’s tips for attracting millennials as customers in a separate article, “The Millennial Connection, Part 2: Engagement”

Our expert panelists for this Live Webinar Roundtable included:

Our moderator, Joel Zwicker—a former insurance agent himself—speaks with hundreds of insurance agency contacts each week and frequently hears about challenges with staffing.

Five generations – but one that matters

The current era is the first time in history that five generations are working side by side. We have the Traditionalists, or the silent generation, people born before 1946, who are phasing out, but still present. There are Baby Boomers and Gen Xers, representing people born from 1946-1964 and from 1965-1982, respectively. We also have Generation Z, those born after 1995, just starting their careers.

However, it’s the 83 million Americans that were born between roughly 1982 and 1995—the millennial generation—who are worthy of special attention from the independent insurance channel.

Millennials represent the largest generation group in terms of size and buying power. They will be the largest group of small business owners after 2020. They will overshadow all other generations in the workforce. But they aren’t flocking to insurance careers like previous generations. In fact, in the next few years, the insurance industry is expecting that 25% of its workforce will retire, and unless it finds a way to attract millennials, it will have a projected 400,000 positions unfilled by the year 2020.

Was it something we… Didn’t say?

Joel Zwicker of Agency Revolution wastes no time in asking the panel why millennials are underrepresented in the insurance industry workforce compared to previous generations.

Tony Cañas tells it like it is: “There’s a lot of entry-level jobs in insurance that are not great jobs,” he admits. “The big difference is that millennials are not afraid to make a move if they’re not happy, which previous generations were much more careful about. Where we’re really suffering is, we’re not keeping them long enough to get them to the point where they love what they’re doing for us.”

Cañas also points out that the insurance industry has never marketed itself well, and the lack of interest that the millennial generation has for working in the field is not new. “I think that previous generations didn’t grow up wanting to work in insurance either. They fell into it by accident,” says Cañas.

Christopher Cook of Alliance Insurance Services agrees, adding, “Insurance is an amazing career and we’ve never really told the story that well. Not only do we have to tell the story of the industry, but we’ve got to tell millennials the story of their career at their respective spot in the industry.”

Cook suggests that even showing a new producer the agency’s organizational chart (which for many small agencies, means creating an org chart!) can go a long way toward retaining a new recruit. “Something as simple as saying, ‘Hey, this is how the structure looks and this is where you can go’ is important. I think millennials want to know what the path is going to be,” says Cook.

Matt Masiello of SIAA and SAN Group also concurs, pointing out that despite its numerous career upsides and rewards, the insurance industry, on the whole, has not made itself sound interesting or fulfilling to the millennial generation.

Masiello’s point is an important one because one of the key traits of the millennial generation is that it’s mission-driven. As independent insurance agencies compete for available millennial talent, it is vital for them to keep in mind that this generation tends to have high expectations of its employers, wants to continually experience new challenges, and truly cares about finding meaningful work.

“We grew up with our parents telling us that we’re awesome, during a time of abundance in the late ’80s and ’90s,” explains Cañas, himself a member of Gen Y. “Basically, we want to make a difference. The funny thing is, in this industry, there are so many opportunities to make a difference… but we’re bad at communicating that during the hiring process and even after we bring employees in.”

Along with a drive to be committed team players working toward important goals, millennials have an unprecedented relationship to technology, as the first generation to enter the workforce AFTER the Internet and cell phones were ubiquitous. They are tech-savvy, and they cannot imagine a world without texting, social media, or smartphones.

Masiello advises independent insurance agencies to tie elements like mission and technology together to sell the insurance career path to millennials – and he promises it will be worth it.

“If we get them in the door with the technology we have, they will help us sort through the other technologies out there to be better, whether it’s better in social media, making our websites more interactive, or helping us find other solutions that the consumers that look like them are going to be using,” explains Masiello.

But how to attract the millennial generation? Cook shares his personal experience as an agency owner to illustrate one of the cornerstones: building a culture.

Cook explains, “The exercise that I’m currently going through is building out our culture. What are our values? Where are we going in the next 5, 10 and 15 years? And how is (each employee) a part of that?”

“I’ve come to the realization that my staff, which includes a lot of young folks, needs to understand what the culture is and what their path is and how they’re impacting not only their lives and their customers’ lives, but the community. It’s taken me a while to come around with that,” says Cook.

Cook also points out that a key component of workplace culture is diversity. “Millennials are a more socially diverse, a more socially accepting crowd. I think that in the insurance space, this is still a ‘good old boys’ network in large part, with a large lack of diversity in any consideration of the word diversity you want to have,” Cook says.

Cañas agrees, “The diversity piece is absolutely crucial. We’ve got to figure out how to engage and retain different crowds.”

However, Cañas points out that adding “fun” accessories to an office and thinking that it creates culture is a pitfall to avoid. “The pool table, the ping pong table, and the beer keg, it’s makeup on a pig,” he advises. “Don’t fall for the cheap fix. It really comes down to the fact that millennials need to feel listened to and they need to feel that they’re making a difference and that there’s a path for growth.”

“I think it’s huge to remember that millennials did not grow up wanting to work in insurance and showing them the path and helping them connect the dots is the only way to having a chance for them getting engaged in growing within the agency,” says Cañas.

Speaking of growing up, when does recruitment begin? Cook hires interns who are recent high school graduates (as well as college students), but others suggest that talking to people even younger than that, could be the secret to success.

Cañas observes that the independent insurance agent has a lot to learn about recruitment from CPAs. “They invested heavily as a profession in getting kids interested very early on in accounting. If you think about it, thousands of kids show up at every college campus every fall, specifically looking for an accounting degree.

“Personally, I think we have a much more interesting and much more rewarding career. We’re really doing something for the world, which is very attractive to this generation,” says Cañas.

“Let’s not ignore the community colleges as well,” reminds Masiello. “I know that some of us struggle with hiring kids coming out of four-year degree programs because of the amount of debt they have and what they’re looking for from a compensation standpoint. Community colleges are a great place for us to swing around and take a look.”

Play to your strengths

Finally, while recruiting, remember to sell the benefits. Life as an independent insurance retailer is a pretty great career after all! It offers terrific income potential, meaningful work, the opportunity to connect with community, and workplace flexibility.

“I got in the insurance space because of the freedom it allows,” summarizes Cook. “I’m an insurance brat. My mother was an insurance professional, a life insurance agent. She was able to provide a very good lifestyle for my little brother and me. She worked very hard, but she had a lot of flexibility in that. She didn’t miss things that we were participating in and that meant a lot to me.

“I think that still holds true in our agency. The flexibility is a big attraction that we probably don’t sell enough, in my opinion. It’s what brought me to this space.

“[Millennials are] the largest generation in the history of the United States, and so they’re going to continue to help each other. Having more and more of them involved in our industry only helps us communicate what a great industry this is, to this generation, and future generations as well,” Cook explains.

Part two in this blog series summarizes our panelists’ discussion about engaging millennials as customers. To listen to the entire conversation between Tony Cañas, Christopher Cook, Matt Masiello, and Joel Zwicker, visit “Attracting Millennials in the Modern Insurance Landscape” on the Agency Revolution webinars page. And, for year-round insight and inspiration about insurance agency marketing, fill out the form on the right side of the page to subscribe to the  Connected Insurance Podcast and get alerts delivered to your inbox.